A new book published by Thames & Hudson and an exhibition now on display at the Museum of Modern Art (MoMA) respectively map the interactive worlds of video games and investigate how people conceive of space and time through interactive design. Take a brief tour through Videogame Atlas and Never Alone.

It is hard to deny the appeal architects have with video games, with their imagined worlds populated by buildings, creatures, and landscapes both familiar and alien. Videogame Atlas and Never Alone remind us that this was the case well before the metaverse, where many of its immersive built environments are being designed by architects, some resembling actual buildings and others departing from the rules of the real world.

Unlike architecture and film — two other sympathetic fields that have been studied together in some depth — there has not been much in the way of books and exhibitions exploring the relationship between architecture and video games. So it is refreshing to see the book and exhibition (the latter with its own catalog) doing just that. Read on for some information on Videogame Atlas: Mapping Interactive Worlds by Luke Casper Pearson and Sandra Youkhana, and MoMA's Never Alone: Video Games and Other Interactive Design. Maps are common features of video games, yet in various ways: in how a game is literally viewed (Pac-Man is basically a map, for instance); as built-in components of video games that help players navigate the larger virtual environments they move through; and as old-fashioned printed maps in guidebooks that give hardcore players tips on specific games. The maps that Luke Casper Pearson and Sandra Youkhana, who together (as You+Pea) lead the Videogame Urbanism Studio at Bartlett School of Architecture, have created for Videogame Atlas are a whole other type: illustrations that visually analyze the urbanism of a variety of interactive game worlds. They present maps on twelve games in various types, from first-person shooters and sandboxes, to role-players and simulators. The diversity allows the authors, both of whom grew up playing video games, to explore a wide range of virtual environments and techniques for analyzing them through mapping. There are nearly 500 illustrations in the book, all of them are by the authors; this means readers that are familiar with the games will have a better understanding of what the maps and diagrams represent. While some of the interactive game-worlds are based on real places, as in the Paris of Assassin's Creed Unity, and are therefore easy to grasp, others are more alien or fantastical, or are hybrids, manipulations of reality. A highlight of the last is Katamari Damacy, a "messy and illogical [world] assembled from thousands of everyday objects," in which a player moves a giant ball around a room, picking up objects and increasing in size until they are large enough "to consume every object on the Earth's surface." Pearson and Youkhana diagram how a player controls the katamari, map how it moves and grows within a room, and illustrate (in the above spread) the size it must be to uproot buildings as it continues to increase in size. A map of the Euclid Galaxy in No Man's Sky. (Image © 2022 Sandra Youkhana and Luke Casper Pearson)

Plans, isometrics, maps, diagrams and more are employed to appropriately describe and analyze the architecture of each game's environment. The one I'm most familiar with, Stardew Valley — a popular indie game available on just about every platform — is depicted in territory maps, interior layouts (below image) and elevations of houses, a diagram of the game's sped-up time, maps of the underground mines, a diagram of social relations, and a "datascape of player-generated information on the game environment." The more I play the game, the more I can follow the illustrations by Pearson and Youkhana; and the more I grasp their book, the more I understand the nuances of the game. I can only guess that Pearson and Youkhana would be happy with such an outcome. The player's Farmhouse on Stardew Valley and mapping for fast traveling across the game's Ferngill Republic. (Image © 2022 Sandra Youkhana and Luke Casper Pearson) 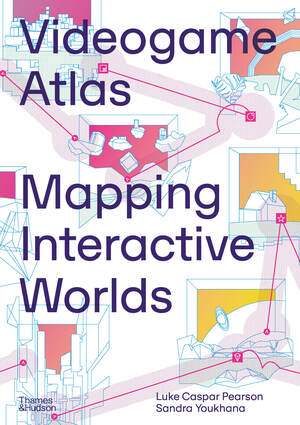 Open since September 10 in the Museum of Modern Art's small street-level gallery (read: no admission or timed ticket required to visit), Never Alone features "notable examples of interactive design from MoMA’s collection, including computer interfaces, icons, apps, and 35 video games." Even though the exhibition broadly looks at the interface between people and digital environments over the last half-century, video games grab all of the attention, especially considering that 10 of the 35 games can be played by museum visitors. These range from Pac-Man and Tempest from the 1980s to numerous games created in the last ten years. Some of the games that visitors can play are well known, including Pac-Man (1980) and Tempest (1981), but also Minecraft (2011) and Monument Valley (2014), among others. One is Katamari Damacy, also in Videogame Atlas. Grabbing the PS2 controller and trying out the game helped the diagrams in the book make sense to me, but the brief time playing it was not enough to grasp the complex physics of the game. Katamari Damacy, like most games, benefits from extended gameplay. In other words, a visit to MoMA is not enough to appreciate a game, no matter how much one may walk away with a greater understanding of the interfaces between us and the virtual worlds. While it is nice to see familiar faces in the small, compact exhibition (the companion book, at bottom, goes into much more depth on the subject of the exhibition and its contents), the standout video games are personal and artistic. These include Jenova Chen's poetic and meditative Flower (2009), where players move as if they are the wind; Never Alone (2014) by Ishmael Angaluuk Hope, a native Alaskan who crafted a survival game inspired by his Iñupiaq elders; Everything is Going to be OK (2017), an autobiographical digital zine by Nathalie Lawhead; and Getting Over It with Bennett Foddy, a difficult game the creator in the title made to "hurt" certain players. These games fit more easily into a museum context than games like Minecraft, but they also signal how much more potential there is for designers to explore with digital interfaces.