Bernd & Hilla Becher, the first posthumous retrospective of the German photographers famous for documenting industrial structures in the second half of the twentieth century, opened at the Metropolitan Museum of Art on June 15. Six years in the making, the exhibition is a must-see.

Bernd Becher and Hilla Becher (née Wobeser) hardly need an introduction to architects. Their black-and-white photographs of water towers, blast furnaces, winding towers, and other industrial structures in their native Germany, other countries in Western Europe, Great Britain, and the United States have endeared them to architects for decades. Buildings are rarely the subject of art, but through the eyes of the Bechers, utilitarian structures that were more engineering than architecture were elevated to fine art. Equal parts documentary photography, science-like taxonomy, Conceptual art, and architectural photography, the Bechers' photographs are instantly recognizable for their roughly symmetrical compositions, even lighting, gray skies, and disciplined consistency spanning fifty years. Bernd & Hilla Becher — the exhibition and the companion monograph — deepens an understanding of the Bechers.

Some impressions of Bernd & Hilla Becher follow, structured according to the layout of the exhibition, which was "designed to be viewed in sequence in galleries numbered from 00 to 06." Ten photographs line the hallway that bisects the galleries of the Met's Department of Photographs that house Bernd & Hilla Becher. The Basic Forms on display provide a taste of the industrial portraits the Bechers are known for, with one water tower (above photo), one grain elevator, one cooling tower, and so forth. Not every visitor traversing The Met will be aware of the Becher exhibition, so the photographs serve to entice them to take a detour through the six numbered galleries. A photograph of a winding tower (or minehead) in Wales is indicative of the general situation that was encountered by the photographers: with the coal mine closing around the time the picture was taken, the Bechers were documenting industrial structures at the ends of their useful lives.

Visitors following the suggested route next encounter photographs taken over the course of nearly 20 years in Siegen, an iron-producing region 60 miles east of Cologne. Houses built for miners in Siegen in the late 1800s and early 1900s followed rules that dictated wood could only be used for structural purposes, not for ornament. So houses with visible columns, beams, and bracing predominated, documented in frontal photographs by the Bechers but also in Abwicklungen, or 360-degree circumnavigations around individual buildings. Although the series of photographs was collected in a book in 1977, the Framework Houses are not as famous as the couple's photos of industrial structures; still, the attributes mentioned at the start of this piece are on found in these houses, indicative of the Bechers' unwavering belief in their approach to documenting buildings, regardless of typology. In terms of chronology, the second gallery in the exhibition presents the earliest work, with output by Bernd and Hilla individually, both before and after they started working together in 1959. The curatorial choice to place it third in the exhibition's seven-piece structure is a good one, since it allows visitor to take a step back from the Framework Houses; having seen what they pair could accomplish together over a couple of decades, visitors can start to understand how they got there. Photomontages of industrial structures and collages of networks of pipes by Bernd are presented alongside Hilla's photographs of oak leaves, steel threads, and buildings at the German Industrial Exhibition — displays of undeniable synergy. It's great to see notebooks (above photo) and other sketches, too, but the biggest standout is some 16mm film footage by Bernd and Hilla's son, Max, which shows his parents setting up shots in the United States; their removal of an obtrusive tree next to one of the structures is most revealing.

This small gallery with just eight prints serves to dispel at least a couple of the myths that have pervaded in the interpretation of the work of Bernd and Hilla, namely that all of their photographs are portraits — in both senses of the word: portrait-format and portraits of individual buildings — and are free of context. The landscape-format photographs here depict the couple's "study of an industrial site as a community of related structures," per the wall text. Not published by the couple until 2003, four years shy of Bernd's death, these Industrial Landscapes should be a surprise to everyone but the most hardcore fans of the Bechers. This halfway point through the seven-part exhibition is an important one, presenting the Bechers' documentation of Zeche Concordia between 1967 and 1970. Located just twelve miles from their home studio, the century-old coal mine was poised to close, leading the Bechers to gain access to it and give the site a comprehensive treatment. The gallery's contents bridge the Industrial Landscapes and Framework Houses, with the photos capturing the Concordia mine as an assemblage of industrial structures but presenting them in groupings — winding towers, machine houses, gas tanks, etc. — that prefigure the Typologies at the close of the exhibition. Not only is the Zeche Concordia case study given its own large gallery in the show, Gabrielle Conrath-Scholl — director of the Photographische Sammlung/SK Stiftung Kultur in Cologne, where the Bechers' print archive is stored — devotes an essay to it in the companion monograph. The placement of the Bechers' photographs within the context of Minimalism and Conceptual art in the 1970s is explored in this gallery, where the couple's own photographs and books are accompanied by sculptures by Carl Andre and Sol Lewitt. Andre was also the author of "A Note on Bernhard and Hilla Becher," printed in the December 1972 issue of Artforum; the one-page piece, on display here as well, "helped the Bechers find an international audience," per exhibition curator Jeff L. Rosenheim. It was here that Rosenheim explained to me during the press preview how architects were part of that audience, pointing out that the Bechers' first book, Anonyme Skulpturen: A Typology of Technical Constructions (1970), was picked up first by the architectural press. Furthermore, a full four years before Andre's piece, in December 1968, Architectural Forum published a gallery of the mineheads taken by the Bechers in Germany, France, and Wales.

The last gallery, across the hallway from the galleries numbered 01 through 05, is the biggest and the best: a double-height space devoted to some of the Typologies that comprise "the crescendo of the Bechers' half-century career." Put another way, if the Basic Forms in the hallway are a taste of the Bechers' oeuvre, this gallery is the main course. Grids of water towers, gas tanks, blast furnaces, and other industrial typologies (12 groupings in total) are on display in the suitably large space. A vitrine displays a selection of books published by the Bechers in their lifetime, each exhibiting a formal consistency that is aligned with their photography. The books are an integral part of their career — the primary means of making their work accessible to artists, architects, historians, and the general public — but seeing the prints together in this gallery is considerably more satisfying than seeing them, smaller, in a book.

Bernd & Hilla Becher is curated by Jeff L. Rosenheim, Joyce Frank Menschel Curator in Charge of the Department of Photographs, with assistance from Virginia McBride, Research Assistant in the Department of Photographs, both at The Met.
The Met developed the exhibition with Max Becher, the artists’ son, and with Gabriele Conrath-Scholl, director of the Photographische Sammlung/SK Stiftung Kultur in Cologne, where the artists’ vast photographic print archive is preserved. 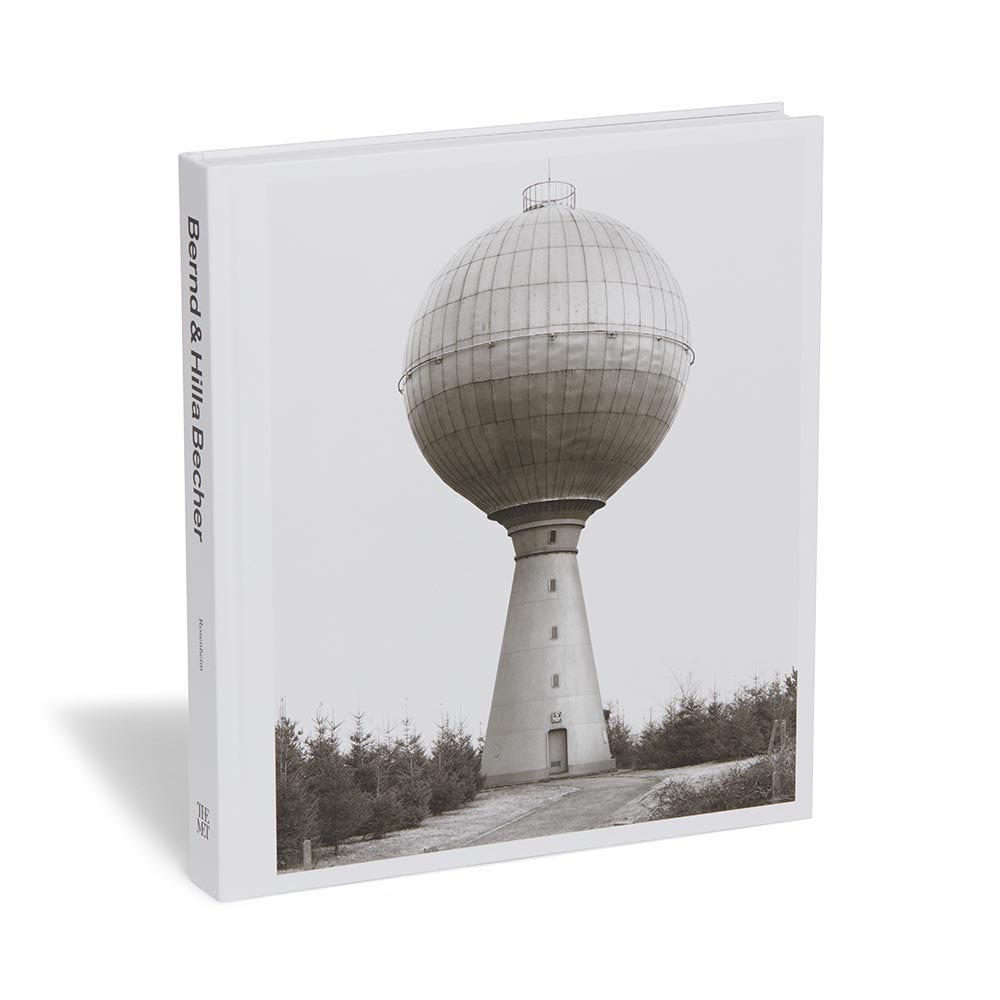