In their new book, Old Is New: Architectural Works by New Material Research Laboratory, artist Hiroshi Sugimoto and architect Tomoyuki Sakakida reveal the inner workings of the practice they formed in 2008. Although the name New Material Research Laboratory expresses innovation, the duo is also interested in techniques from ancient and medieval eras.

You don’t have to be an architect to revolutionize architecture. Contrary to traditional architectural training, many breakthrough innovations in architecture in recent years have come from people like Daniel Libeskind, Rem Koolhaas, and Tadao Ando, who never or barely ever studied architecture. In Japan, the famous photographer Hiroshi Sugimoto declared himself to be a new type of architect and has designed one interesting and beautiful building after another: the Izu Photo Museum in Shizuoka, the Odawara Observatory in Enoura, and the ongoing refurbishment of the Hirshhorn Museum and Sculpture Garden in Washington, DC. The architectural scene inside and outside of Japan has turned its head in awe. Still, a licensed professional is needed to file for a building permit, and as an artist you also need a proper architect to talk with about architectural design; for Sugimoto it is the young architect Tomoyuki Sakakida from Kyoto, who became the artist’s alter ego in a congenial way and to mutual benefit.

Lars Müller Publishers of Switzerland, known for beautiful architecture books anywhere in the world, has published the first book on the pair’s collaboration. Their New Material Research Laboratory, or Shinsoken (short for Shinsozai Kenkyujo), has the motto: “Nothing is newer than the use of old materials.” Their cross-breeding has been fruitful but it was not planned. “I made a conscious decision to take up a specific line of work only once in my life,” writes Sugimoto. “It was in 1974, just after I moved to New York, and I had just visited a Donald Judd exhibition where the walls were lined with plywood boxes.” It was then he became a multi-faceted artist. “I have many professions,” he continues, ”my goal is to glimpse what lies just over the horizons.” Although the polymath “was brought up in the modern era,” he writes, “I have a keen interest in the workings of premodern human societies.” He thinks tradition is in danger of being “preserved but spoiled through protection.” In 2001 Sugimoto got his first architectural commission, to revive the little Go-oh Shrine on Naoshima island. He designed it to resemble the kofun (burial mounds) that were popular in Japan until the Yamato dynasty unified Japan and embellished its most sacred place, the famous Ise Shrine near Nagoya. Sugimoto’s structure expressed forms of faith from this period, when patterns of nature worship cultivated over the Jomon period were concentrated into the unified Ise Shinto. A 24-ton slab of stone — the iwakura (sacred rock) — was hollowed out to form a chamber beneath it, with a staircase of glass going up. The shrine’s location on a hill demanded that the excavation was done by hand. When rain brought work to a halt one day, the site collapsed. Sugimoto removed the soil and gravel to reveal the stone slab once more and a natural outer shrine presented itself. Sugimotos’s work, “guided by some divine, invisible hand,” as he puts it, “allowed the space to reveal itself.” From then on, Sugimoto saw “plans as suggestions, not instructions.” To position the slab of stone, he had to let it “speak” to him.

“Museums tend to avoid the use of natural light to prevent fading and deterioration of artwork,” Sugimoto writes, but he thinks prolonged exposure can lead to beauty, something he explored at Setsu Gatodo (2005), the gallery of an antique dealer in Nihonbashi, Tokyo. “Museums should consider that deterioration is beautification and fading is the emergence of inexpressible refinement.” The self-proclaimed “heretic among professionals” wants exposure to natural light to give artworks “a muted sheen, adding to their character.” Sugimoto aims to achieve “not deterioration and degradation, but simply for plain materials to reveal, through the passage of time, a more sublime face with a more lustrous patina.” These kinds of statements hit a nerve in 2021, when architects around the world are thinking about aging buildings and the reuse of materials in ways deeper than before. The second big strike, architecturally speaking, was the Odawara Observatory (2017) in Enoura, south of Tokyo, an area that offers great views of Sagami Bay and the Pacific Ocean. Sugimoto originally built a long tunnel for observing the light of the winter solstice. Needing a young architect as “sounding board” from planning to construction, he found Tomoyuki Sakakida. The architect’s “insistence on half-forgotten premodern techniques, the use of plain materials like timber and stone, [and] rejection of surface in favor of substance” must have appealed to the artist. The Light-Worship Gallery and the elegant Reception Building at Enoura have a strong traditional Japanese feel. More contemporary in nature, the 100-Meter Gallery is cantilevered, with a lightweight roofing slab supported by a wall at only one side so the expanse of glass stands free of columns. The Reception Building has an open feeling, with glass walls on all four sides.

In an interview with Sugimoto and Sakakida, Fumiko Suzuki focuses on the differences between New Material Research Laboratory and standard architecture firms. Suzuki identifies three routes on Sugimoto’s path to architecture. First are the spaces where his artworks were displayed, with exhibitions designed by the likes of Daniel Libeskind and Frank Gehry. Exhibiting his art in spaces that bore the robust imprint of the architect’s personal touch led to a confrontation of egos, so Sugimoto began to construct his own exhibition spaces. The second thread is his photographic work. In the “Architecture” series from 1997, Sugimoto photographed modern and contemporary buildings with his camera set to “twice infinity.” This diverse compilation of blurred images sheds an ironic, critical gaze on traditional architectural photography; to Sugimoto, they represented the “images when they initially floated into the architect’s mind.” The third and maybe most important thread is Sugimoto’s serious interest in traditional Japanese buildings and gardens, especially the aesthetics of temples and shrines.

Sugimoto’s first Tea House, Uchoten (Listen to the Rain, 2013), is a copy of the 16th-century Tai-an tea house by Sen no Rikyu. With a roof of rusted, corrugated steel panels, it considers materials in the same way the famous tea master preferred: simple and unpretentious. Sugimoto’s second Tea House, the “Glass Tea House Mondrian” (2014), is a cube with four walls and a ceiling made of glass. With its glass surfaces and two entrances — the nijiriguchi (low-hung entrance for guests) and sadoguchi (higher entrance for the host) — the design recalls its namesake, Piet Mondrian’s abstract paintings, becoming itself an abstract tea house. The final chapter of the book is an interesting reading of the history of modern architecture in Japan. In contrast to the common canon that emphasizes Kenzo Tange’s invention of a Japanese modern architecture, Sugimoto names three heroes: Sutemi Horiguchi, Isoya Yoshida, and Togo Murano.

In 1920, Horiguchi founded the Bunriha Kenchiku Kai (Secessionist Architecture Society), the first modernist architecture movement in Japan, to fuse architecture and modernism through the study of tea houses and gardens. Horiguchi designed many gardens, even though creating gardens was and is not seen as the architect’s job. The inseparable nature of garden and building in Japan is illustrated in Horiguchi’s Garden of Autumn Glass at the Okada Residence (1933).

Togo Murano, too, worked on tea houses and sukiya buildings, such as the Kasuien (1959) in Kyoto, but “from the eighties on, there has not been anyone to take up the baton,” writes Sugimoto. Without any shyness, he admits, “I’d like to take over the task of examining how the aesthetic of the sukiya can be incorporated into a contemporary lifestyle.” New Material Research Laboratory, as the name implies, defines that a key of its work is the investigation into materials. It seeks to liberate traditional materials and techniques from their regional traditions and to investigate their uses from a freethinking perspective. The possibilities for their use are based on trust in artisanal techniques, not a mere taste for revivalism. A century has elapsed since modernist architecture emerged, and time has come “to reappraise the importance of working by hand and of using good materials,” the two write. In taking elements of traditional architecture and making them abstract, the pair shares a sensibility.

“Architecture is born out of the trinity of material, artisans and designer,” says Sugimoto. “Formidable detail is achieved when the designer and the artisan evaluate each other’s skills accurately.” Before the modern era, architecture and art were not divided from one another. Art and architecture came into the world as an inseparable pair and a period of rapprochement between art and architecture might be around the corner, if New Material Research Laboratory is any indication. While diminutive for a monograph and understated in design, this book is nothing short of an architectural manifesto — a new take on architecture in Japan and a potential way forward for architecture everywhere. 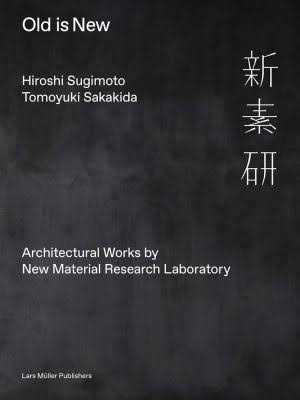