Anime Architecture, the new book from curator Stefan Riekeles, presents hundreds of backgrounds from eight classics of Japanese animation. The stunning book immerses readers into the "imagined worlds and endless megacities" of Akira, Ghost in the Shell, Metropolis, and others.

Anime Architecture: Imagined Worlds and Endless Megacities is not just for hardcore fans of anime. Yes, people who know what Patlabor and Tekkonkinkreet are will love seeing those and other films in the book. But given how Stefan Riekeles hones in on the backgrounds — the "cuts" in anime terminology — against which the various animated stories unfold, the book should appeal to a wider audience, including, as the title alludes, architects. The cuts, after all, are the end product of the production-design phase: called sekai-kan in Japanese, Riekeles points out it translates as "world view."

The author further explains: "In anime, these worlds are created through a cinematic montage of graphics and paintings. In principle, any visual fantasy could be realized by these methods. However, to make a story convincing and to transform the characters into figures with whom we can identify, the drawn and painted architecture has to harmonize with the world of the film — it must be credible in narrative terms." The three films that dominate the book are Akira (directed by Katsuhiro Otomo, 1988), Ghost in the Shell (Mamoru Oshii, 1995), and Tekkonkinkreet (Michael Arias, 2006). Together these films are given 115 pages, the same number devoted to the remaining five films: Patlabor: The Movie (Mamoru Oshii, 1989), Patlabor 2: The Movie (Mamoru Oshii, 1993), Metropolis (Rintaro, 2001), Innocence (Mamoru Oshii, 2004), and Rebuild of Evangelion (Hideaki Anno, Kazuya Tsurumaki, 2007, 2009). With four films among the eight to his credit, clearly Mamoru Oshii is an influential anime director (Innocence, its should be noted, is the sequel to Ghost in the Shell). But in Anime Architecture — the outcome of an exhibition first mounted in 2016 — Riekeles delves into the studios, art directors, and others who contributed to crafting the images on display. Much of Riekeles's text takes the form of captions, ranging from brief, one-sentence descriptions to multiple paragraphs that illuminate the processes of creating the "world views." For the above cut from Ghost in the Shell, the author explains how the artwork by Shuichi Kusamori "was laid out with the idea of a telephoto lens in mind, compressing the screen." This reveals how cuts, in addition to being striking and convincing, must be aware of and work with the medium of film.

Next to the cut, above, is a still from the film that depicts a character looking toward us but apparently running through the narrow space in the direction of the distant skyline. These stills, which pepper the book, are helpful in revealing how the cuts were cropped to fit the framing of the films and in showing how the animated characters are part of the scenes. The small size of the stills on the page, though, ensures they don't overpower the anime architecture depicted in the backgrounds. Another helpful bit of imagery in the book is the occasional scouting shot. In one instance, location photographer Haruhiko Higami took photos of "new and unfamiliar views" in Tokyo (above) to give Patlabor "a relatively realistic and critical picture of the structural changes already taking place in Tokyo's cityscape" in the 1980s, in the author's words. He shot strictly in black-and-white to not influence the art director, Hiromasa Ogura, whose similar view (below) "reflect[s] the quality of light in a Tokyo summer," and whose "wide range of shades of green gives the scene a slightly melancholy atmosphere." Melancholy atmosphere, indeed: If there is one phrase that pervades the hundreds of images from the eight films in Anime Architecture, it's atmosphere. Not all of the backgrounds are melancholy (though many of them are dark and therefore far from happy), but each one has a tangible mood that comes across through the colors, shadows, points of view, and architectural forms. The cuts are almost powerful enough to fully convey the emotion of each scene, eliminating the need for the smaller stills alongside them. Traditionally, animated films are the interaction of moving figures in front of static backgrounds, but here, in the pages of Anime Architecture, the backgrounds are rich enough to stand on their own. 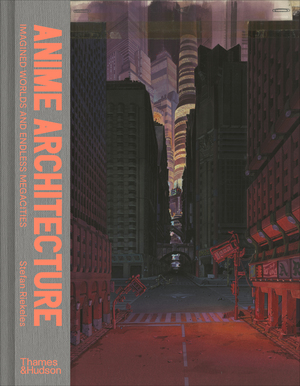 Inside Outside Does MAXXI

Chicago Building Wins US Building of the Year — Again